THE PASSION OF CHRIS.

I'm often drawn to people that are so hooked on their subject that their enthusiasm rubs off on you. The excitement picked up in their voice coupled with the extensive knowledge seems to not only make me listen to the subject in which their talking about but it also gives me some insight into why their so passionate about it.
It matters not what that interest may be, whether it be history, astrology or even language for instance, that somebody's passion for that topic can be traced back to a specific point in the past. Whatever sparked that passion, it becomes a catalyst that reacts infectiously and drives them throughout their lives, the enthusiasm never leaves.

Whether it be familiarity with his written prose or his time in front of a camera, non can deny that Chris Yates is passionate about fishing and wildlife.
The chance to spend time in the company of some such an enthusiast and to share the subject was too good an opportunity to miss. But it wasn't as easier decision as I thought it would be, I was in two minds about it.
It evoked a conscience for one thing, I felt that meeting him would not only dispel any mental image of him I've pictured from reading his novels but would retract yet more of his valuable time away from him. Time he, like us all, is rapidly running out of as it becomes a more increasingly precious commodity. We're often reminded of that fact by our child's/grandchild's birthdays or moments in their lives that signifies their coming of age yet also denotes the increase in ours too.

It was during one of our conversations on the phone arranging a mutually convenient diary date and listening to his forthcoming family commitments which reminded me of why our time spent fishing is so cherished.
It is crucial that the angler strips back to basics to get the very utmost enjoyment from that precious time. What tackle you use, what you're wearing or your methods falls to insignificance.
You should allow yourself to get down and dirty with nature and just be glad to be a part of it and be thankful. Get among the nettles, grasses and reeds with the voles and grass snakes. Absorb all the beauty that surrounds you and enjoy it.
Thinking back to halcyon times when every fishing trip was an adventure until it was time to wearily drag yourself home with grubby knees. 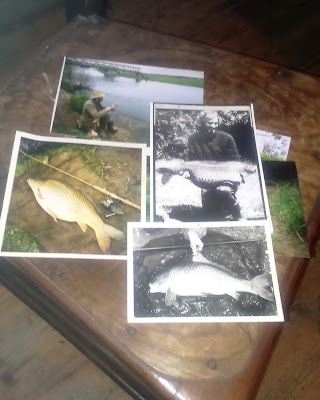 Did it matter that you didn't have all the latest gear or wore a brightly coloured replica football shirt? Probably not, but you definitely spent a few minutes reflecting on the day and almost certainly thought about plans for your next trip in those moments before sleep took you to a reverie of quiet pools fizzing with bubbles.
Those are the times you yearn to experience again. They are still possible if you follow B.B's philosophy to study to be quiet and are driven by a passion enough to want to. 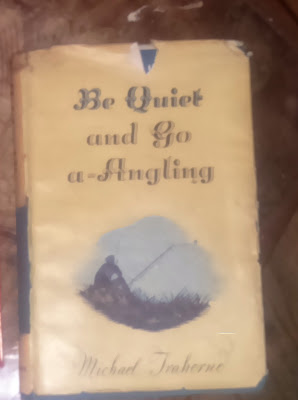 I set off about eight having taken note of Chris's directions a few days before on the phone. I use the word 'directions' loosely. Travelling a hundred and twenty odd miles looking for a welly sticking out of a hedge didn't really sit well with my self confidence. Especially with his last words echoing in my ear that he would "Try and remember to put the welly out the day before!"

Being pre warned that Chris didn't do early mornings, it was suggested I arrive mid to late morning. I gingerly rattled a rather Heath Robinson wind chime at 10.45 and a tame Robin came and sat behind me on the apple tree as if to give me the once over while I waited. The aroma of toast and marmalade wafted out the door as it opened and I detected the faint background hint of blended tea too.


We chatted about floats, books, rods and fish til well after 2pm which ignited a mutual passion and whetted our appetites for a practical session by the riverbank.

We crept among the nettles beneath the willows and settled ourselves down in his favorite Gudgeon swim for the battle of the gonks.

Sat beneath the canopy of a weeping willow we relived those halcyon days where such simple tactics and satisfying surroundings quenched our very souls. 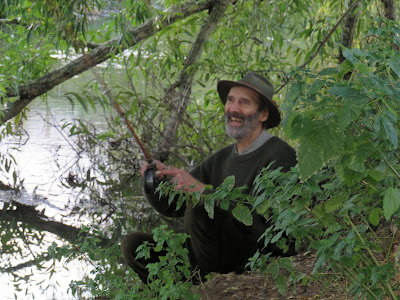 We were rewarded with the sighting of a kingfisher, that moment when the earth suddenly stands still and everything pales in insignificance at the passing of the king. Electricity that not only captures the brilliant blue but describes those moments that seem to stun the atmosphere with charged static.

We'd opted to take some photo's of our first fish laying beside a miniature rod I built several years ago whilst whittling in my shed and resides pride of place among the curios in his study. 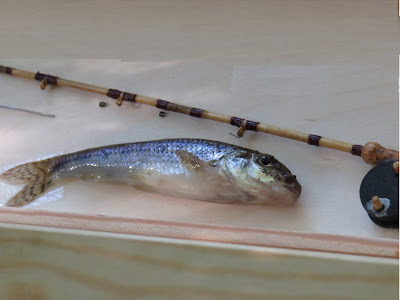 Among the mixed bag of Dace, Roach and Chublets between us were a modest few target species. It is customary to have a gonk match and I've no shame in admitting defeat to the master. 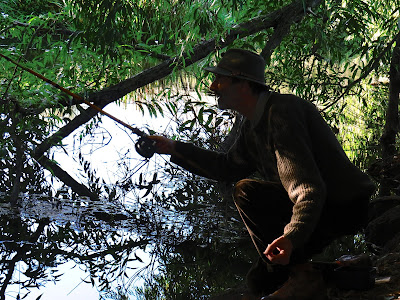 At one stage he'd even gave me a sporting chance to catch up by tying a size 8 hook and baiting it with ten maggots and a worm.
He still managed to out fish me catching a fish a chuck. 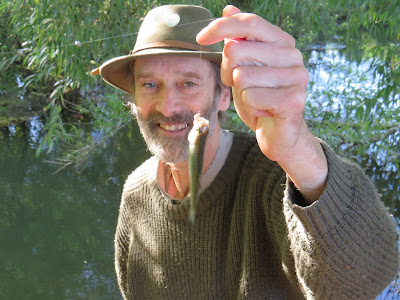 I fished with an old fly rod he'd had converted into a perfect Gudgeon tamer coupled with a Richard Carter Dragonfly pin and Chris used a Barder pin and a Sealey Floatcaster. Very different choices as far as those first early items that took hold of Chris's imagination and set the hook of the magic that was yet to come. 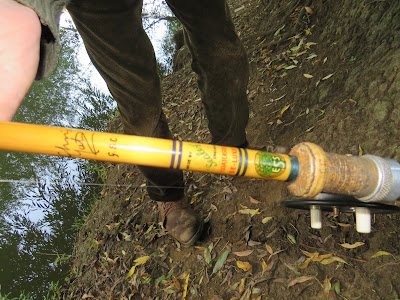 Returning back to his at dusk for more talk on the days events over tea, we discussed plans for next time. Just as passionate, just as excited, and equally keen as once it was.
I'm going to require surgery to remove that smile. 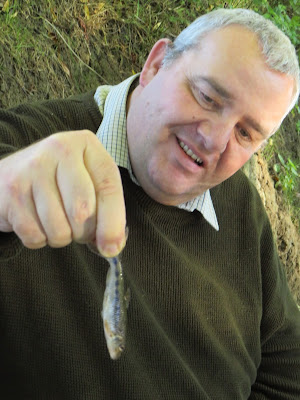 Posted by Richard Cleaver at 08:19